A Comparison Of 11 Classical Electrode Arrays 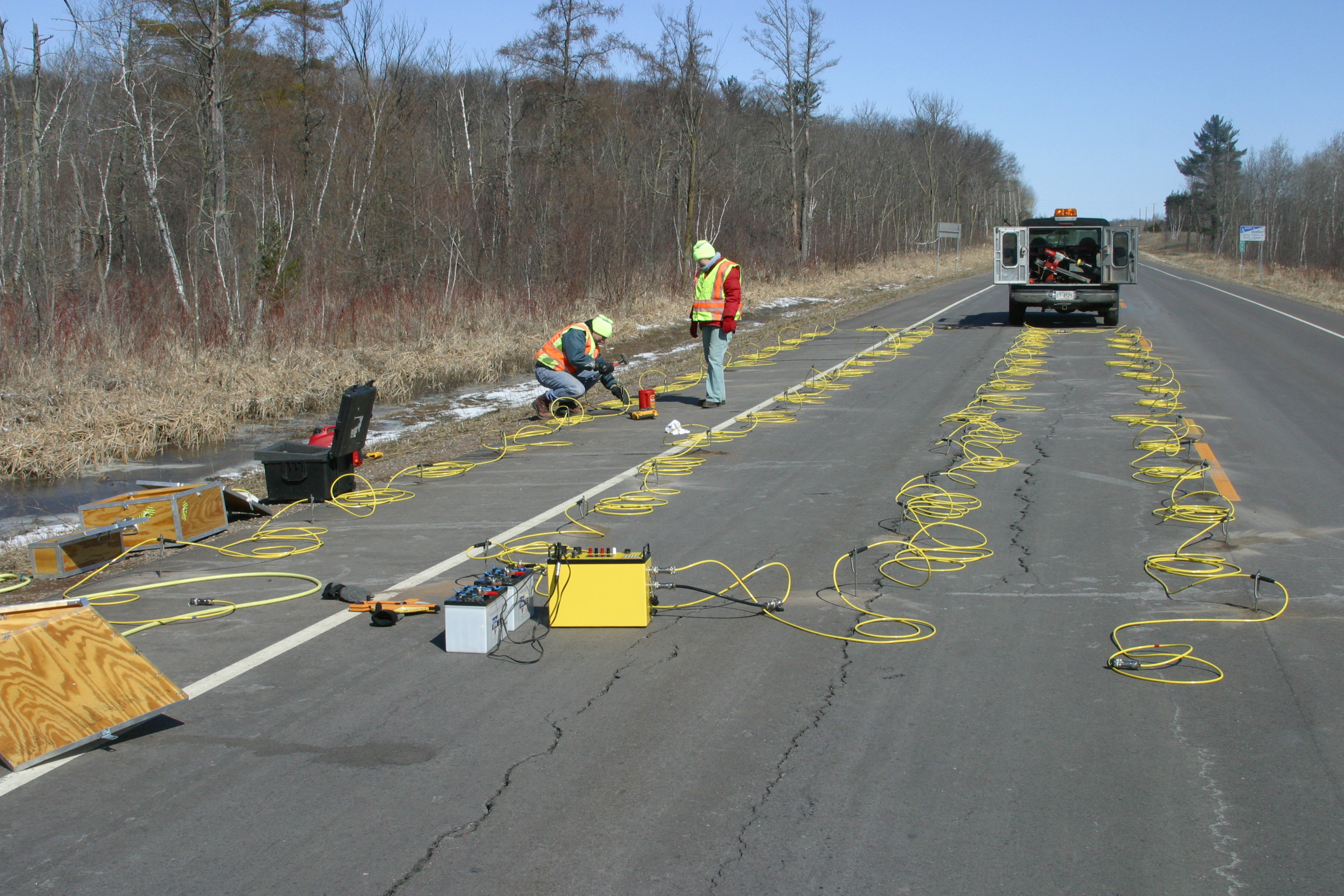 Electrode arrays can be defined as various arrangements of electrodes used to perform geophysical resistivity measurements. These arrays were developed before computers and modern algorithms were available in order to make field measurements more efficient and data interpretation easier. Even with today’s automatic resistivity imaging instruments, these arrays are still used in order to ensure an even coverage of data points.

There are a number of different arrays, but only a few have been important and frequently used. These include the Schlumberger array, the Wenner array, and the dipole-dipole array. Other less commonly used arrays are pole-dipole, pole-pole, square, bipole-bipole, equatorial, gradient, and azimuthal.  In the paper below, we’ll provide an overview of each of these arrays.

A Comparison Of 11 Classical Electrode Arrays 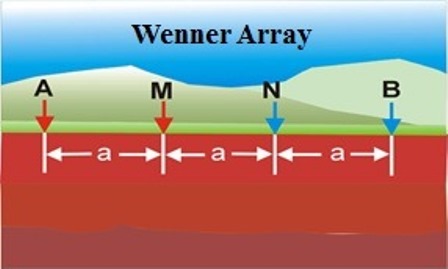 The Wenner array can be used for profiling (also known as electrical trenching) or for vertical electrical sounding (also known as VES or electrical drilling), and there are benefits and drawbacks for each. The advantage of the Wenner method is apparent when you perform a profiling survey, because in this implementation you will move only one electrode for each measurement.

It’s important to note that you can use a combination of arrays in many instances. For example, if you’re looking for groundwater but know there’s a rock beneath the soil, you’d first want to determine the depth-to-bedrock using VES with the Schlumberger array. Once you’ve determined this, you could move the electrodes for the Wenner array and set the correct depth sensing for profiling needed to penetrate the rock. When the Wenner array then moves over a fracture, it could indicate a low-resistive area, thus indicating the presence of water.

The Schlumberger array was named for Conrad Schlumberger, the founder of the modern-day Schlumberger oilfield services company and pioneer of electrical methods in the early 1900s. During this period, both the Schlumberger and Wenner arrays were used extensively for mineral and groundwater exploration. 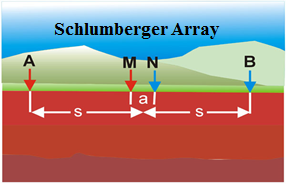 The dipole-dipole array, consisting of a current electrode pair and a potential electrode pair, was originally used for mineral exploration with the induced polarization (IP) method. 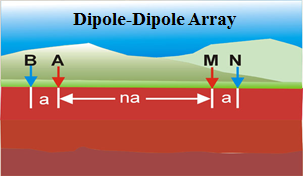 In order to get an idea of the earth’s cross-section, the result of a survey are plotted in a so-called pseudo-section, where the apparent resistivity data is plotted at the midpoint between the two dipoles and at a depth of 18% of the dipole-to-dipole separation [Edwards, 1977, A modified pseudosection for resistivity adn IP: Geophyscics, v. 42, no. 5, p. 1020-1036]. The values are then contoured and colorized to represent a rough image of the subsurface. It is the job of modern inversion software to recalculate all these apparent resistivity values to “true” resistivity so that a realistic image of the ground can be created.

When compared to the Wenner array, which provides a big picture, the dipole-dipole array provides great detail. The disadvantage is that it doesn’t reach very deep as the receiving dipole will lose the signal if they’re placed too far from the transmitting dipole. 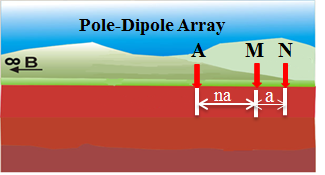 After placing the remote B-electrode at infinity, you then move the potential electrodes (the receiver dipole; electrodes M and N) to a position one dipole spacing away from the current A-electrode and take a reading. Then the receiver dipole is moved one additional dipole size away from the A-electrode, and another reading is taken. This continues until you begin losing signal between the current and the potential electrodes.

The pole-dipole array is preferred to the Dipole-Dipole array when it comes to depth penetration, since depth is related to the distance that separates the A-electrode and the M-electrode. 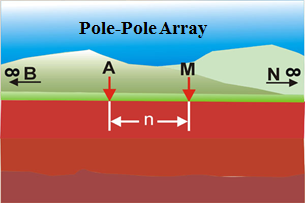 You then proceed exactly as you would with pole-dipole: The current electrode stay in the same place and the potential electrode move out to take new readings. The primary issue with using the pole-pole array is space. For example, if the survey area is 100 meters in length, the remote electrodes (B and N) would need to be placed at a distance of at least twenty times the survey area. The two infinity electrodes would then be at least 2100 meters apart. The two infinity electrodes are stationary during the entire survey, so you may have to get permission to place them on someone else’s land for the duration of the survey. You also have to consider traffic that could run over your remote electrode cables, creeks, or brush when handling the remote wire.

The equatorial array consists of the two dipoles—A-B and M-N—oriented perpendicular to the survey line and parallel to each other. The advantage of the equatorial array is that you are able to penetrate deeper into the ground than when using the dipole-dipole array, assuming the length along the survey line is the same. This can be particularly advantageous when pulling an array of electrodes behind a vehicle or in limited spaces. 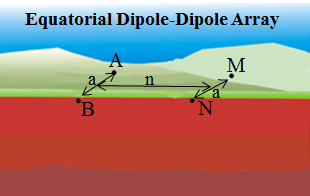 The square array is a special case of the equatorial array, named because the electrodes form the shape of a square and the sides of the array are all equal length. This array is used most frequently in determining the anisotropy (i.e. resistivity in different directions) of a geological formation. Instead of expanding the electrodes, the square is turned typically 15 degrees for each measurement around the center point of the square.

For example, let’s say a hydrogeologist needs to survey a rock body with a fracture system through it to locate the general fracture direction. Taking a number of readings through the square array, he can determine which direction is more conductive and thus the main direction of the fractures. Furthermore, if you needed to see deeper to gain more information on the fractures in the rock body, you could expand the size of the square and repeat the same procedure. It may, for instance, show that the fracture changes direction at a particular depth. 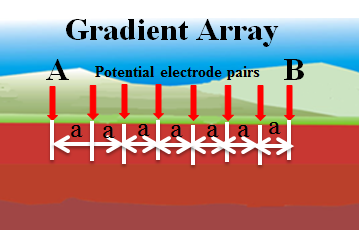 “Azimuth” is the direction or angle compared to north. The azimuthal method is actually less of an array and more of an electrode orientation. For example, you may measure with either a Wenner array or Schlumberger array in order to determine the resistivity of a formation in a certain direction as described for the square array.

When your current electrodes are at 12:00 and 6:00 you take the first reading. You may then spin the whole array around the center point and move so that the current electrodes now are at 1:00 and 7:00 then to 2:00 and 8:00 and take a reading for each new position until you’ve made half a turnaround. Evaluation of this data will give you information about fracture patterns in the formation below. 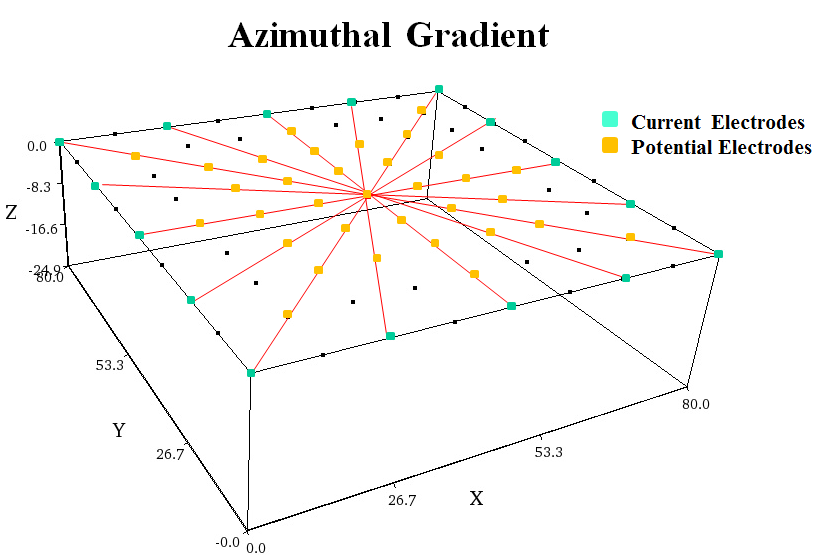 Mise-a-la-masse is a French term that literally translates to “charged mass.” Mise-a-la-masse is more of a survey method—like vertical electrical sounding or profiling—than it is an electrode array, but it’s still in the same family. It primarily uses the pole-dipole array to delineate an ore body. 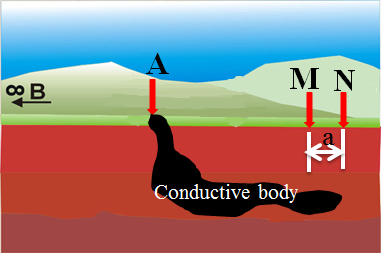 The word bipole is used instead of dipole when the two transmitting electrodes are placed so far apart that the electric field from them can be considered a field from two separate poles. In other words, the distance between the receiver and transmitter dipoles is small in relation to the dipoles themselves. 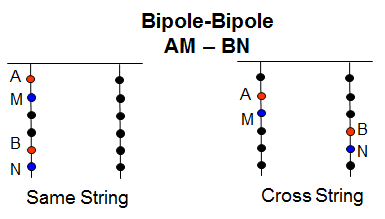 Questions about these electrode arrays?

We would love to discuss any comments or questions you have. Simply fill out the form on this page, and we’ll be in touch shortly.