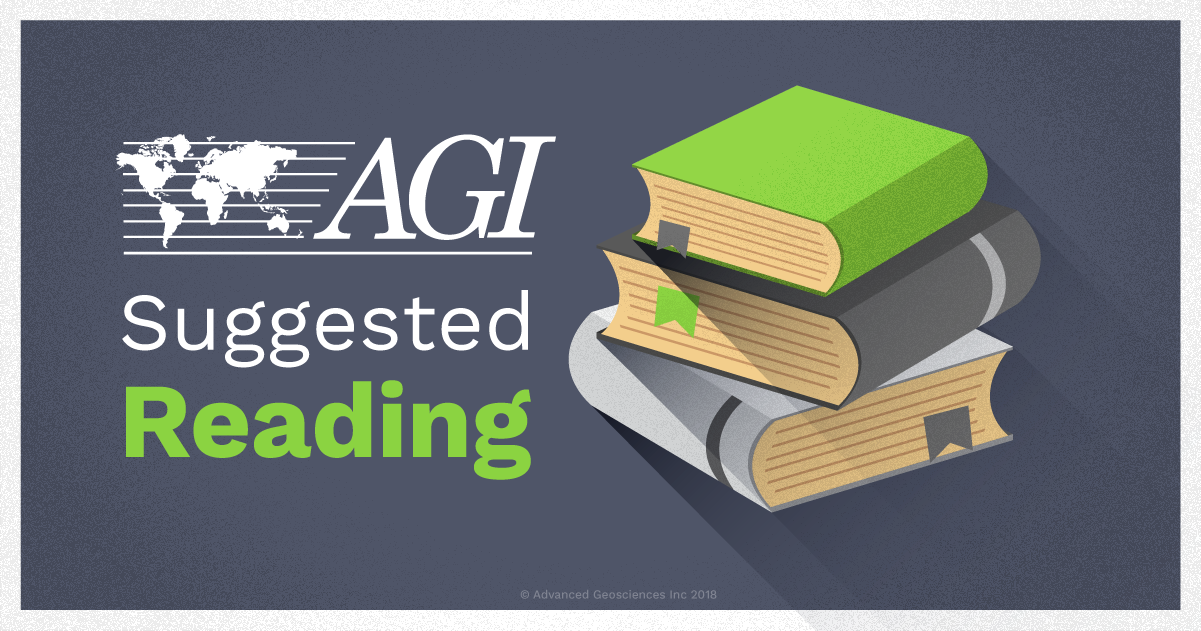 Welcome to this eight-part series where we’ll be recommending some further reading for those of you who want to learn more about resistivity, induced polarization, and more. We’ve used the publications in this list time and time again—and we want to share that knowledge with you!

This won’t be a definitive list (since there is a lot of great literature out there), but the publications we’ve chosen should help to give you a better understanding of these topics—which can only improve your future geophysical surveys. We’ll be linking to the Society of Exploration Geophysics (SEG) digital library  and the Wiley Online Library whenever a publication is available. Please note that you’ll need an account to access the digital version of each publication. For all entries not available on SEG or Wiley, we’ll link to a site where you can purchase. Stay tuned for more suggestions in this series!

Now let’s get started with our first trio of suggestions:

The inversion of electromagnetic sounding data does not yield a unique solution, but inevitably a single model to interpret the observations is sought. We recommend that this model be as simple, or smooth, as possible, in order to reduce the temptation to over interpret the data and to eliminate arbitrary discontinuities in simple layered models. To obtain smooth models, the nonlinear forward problem is linearized about a starting model in the usual way, but it is then solved explicitly for the desired model rather than for a model correction. By parameterizing the model in terms of its first or second derivative with depth, the minimum norm solution yields the smoothest possible model. Rather than fitting the experimental data as well as possible (which maximizes the roughness of the model), the smoothest model which fits the data to within an expected tolerance is sought. A practical scheme is developed which optimizes the step size at each iteration and retains the computational efficiency of layered models, resulting in a stable and rapidly convergent algorithm. The inversion of both magnetotelluric and Schlumberger sounding field data, and a joint magnetotelluric‐resistivity inversion, demonstrate the method and show it to have practical application.

Magnetotelluric (MT) data are inverted for smooth 2-D models using an extension of the existing 1-D algorithm, Occam’s inversion. Since an MT data set consists of a finite number of imprecise data, an infinity of solutions to the inverse problem exists. Fitting field or synthetic electromagnetic data as closely as possible results in theoretical models with a maximum amount of roughness, or structure. However, by relaxing the misfit criterion only a small amount, models which are maximally smooth may be generated. Smooth models are less likely to result in overinterpretation of the data and reflect the true resolving power of the MT method. The models are composed of a large number of rectangular prisms, each having a constant conductivity. Apriori information, in the form of boundary locations only or both boundary locations and conductivity, may be included, providing a powerful tool for improving the resolving power of the data. Joint inversion of TE and TM synthetic data generated from known models allows comparison of smooth models with the true structure. In most cases, smoothed versions of the true structure may be recovered in 12–16 iterations. However, resistive features with a size comparable to depth of burial are poorly resolved. Real MT data present problems of non‐Gaussian data errors, the breakdown of the two‐dimensionality assumption and the large number of data in broadband soundings; nevertheless, real data can be inverted using the algorithm.

A numerical technique has been developed to solve the three‐dimensional (3-D) potential distribution about a point source of current located in or on the surface of a half‐space containing an arbitrary 3-D conductivity distribution. Self‐adjoint difference equations are obtained for Poisson’s equation using finite‐difference approximations in conjunction with an elemental volume discretization of the lower half‐space. Potential distribution at all points in the set defining the subsurface are simultaneously solved for multiple point sources of current. Accurate and stable solutions are obtained using full, banded, Cholesky decomposition of the capacitance matrix as well as the recently developed incomplete Cholesky‐conjugate gradient iterative method. A comparison of the 2-D and 3-D simple block‐shaped models, for the collinear dipole‐dipole array, indicates substantially lower anomaly indices for inhomogeneities of finite strike‐extent. In general, the strike‐extents of inhomogeneities have to be approximately 10 times the dipole lengths before the response becomes 2-D. The saturation effect with increasing conductivity contrasts appears sooner for the 3-D conductive inhomogeneities than for corresponding models with infinite strike‐lengths. A downhole‐to‐surface configuration of electrodes produces diagnostic total field apparent resistivity maps for 3-D buried inhomogeneities. Experiments with various lateral and depth locations of the current pole indicate that mise‐à‐la‐masse surveys give the largest anomaly if a current pole is located asymmetrically and, preferably, near the top surface of the buried conductor.