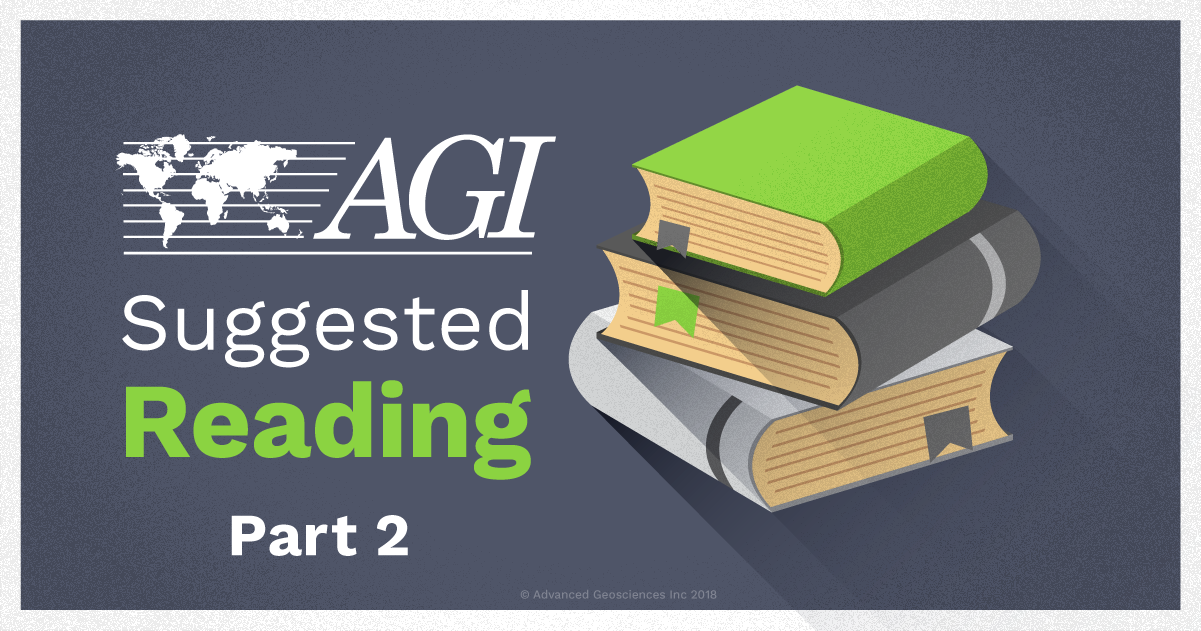 Welcome back to our eight-part series where we’ll be recommending some further reading for those of you who want to learn more about resistivity, induced polarization, and more. Click here if you missed Part 1.

Ok, on to our second round of suggestions:

Dipole‐dipole induced‐polarization measurements are commonly presented as pseudosections, but results using different dipole lengths cannot be combined into a single pseudosection. By considering the theoretical results for simple earth models, a unique set of relative depth coefficients is empirically derived, such that measurements with different array parameters will “mesh” smoothly into a combined pseudosection. Application of these coefficients to a number of theoretical and field cases shows that they give reasonable results when applied to more complicated models. The empirical coefficients are compared with Roy’s theory of “depth of investigation characteristic,” and support that theory, if a modified definition of “effective depth” is accepted. This leads to an absolute depth scale for the modified pseudosection. It is shown that rough estimates of the depth to the top of an anomalous body can be made directly on the pseudosection, at true vertical scale. This definition of effective depth is applied to other electrode arrays. It is shown, by examples, that the resulting pseudosections give consistent estimates of depth to top, within the characteristic anomaly patterns of each array. The effective depths for various arrays are compared; the results agree with the traditional applications of each array.

The nonuniqueness of geophysical inverse problems is well understood and it is now common to solve the inverse problem by minimizing a model objective function subject to a requirement that the data are adequately reproduced. The two main impediments to successful inversion are therefore specifying what objective function to minimize and how well to fit the data. In this paper we outline a general inversion methodology that can be used to invert geophysical data to recover 1D, 2D, and 3D earth models. We focus upon the importance of the objective function and show that attempting to find minimum structure models is a good strategy for a first inversion. The examples are drawn from field data and illustrate that geophysical inversions can provide meaningful information about geological structure and mineralization.

A monograph describing the state-of-the-art of the induced polarization (IP) method appropriately records the evolution of its development and mention of those who were involved. Electrical polarization effects in soils and rocks were first recognized by Dr. Conrad Schlumberger about 1911 in France at a time when geophysics was first being considered as an aid to mineral prospecting. World War I intervened and Schlumberger's work in IP investigations was sidetracked. During the 1920s Schlumberger began to work on borehole logging methods for petroleum exploration. After 1929, the U.S.S.R. embarked upon an extensive geophysical program for exploring for petroleum in the Grozny region north of the Caucasus. Experimentation with IP logging for formation evaluation was investigated but failed due to poor instrumentation. During the 1930s, there were a number of attempts to use the polarization technique for the detection of oil and ore bodies.

During World War II, the U.S. Naval Ordnance Laboratory worked on an electrical polarization technique for detecting explosive mines in water. After the war Dr. D.F. Bleil, with assistance of the U.S. Geological Survey, field tested the technique in two mineralized areas. The idea was brought to the attention of Newmont Mining Corporation by Radio Frequency Laboratories located in Boonton, New Jersey, and Dr. Arthur Brant, University of Toronto, was brought in as a consultant. In the fall of 1948, Dr. H.O. Seigel demonstrated that the IP method was reliable. In 1949 Newmont Exploration Ltd. Was quickly established in Jerome, Arizona under the leadership of Dr. Brant to investigate and exploit the IP method. In the fall of 1952, a group at Massachusetts Institute of Technology headed by Dr. Ted Madden began to investigate the IP phenomenon and work was carried out in association with several mining companies. At the New Mexico Institute of Mining and Technology, Dr. V. Vacquier and his group attempted in 1953 to apply IP techniques to groundwater exploration. Between 1955 and 1960, several universities in the United States began to investigate the IP phenomenon and a few mining companies started their own research groups.