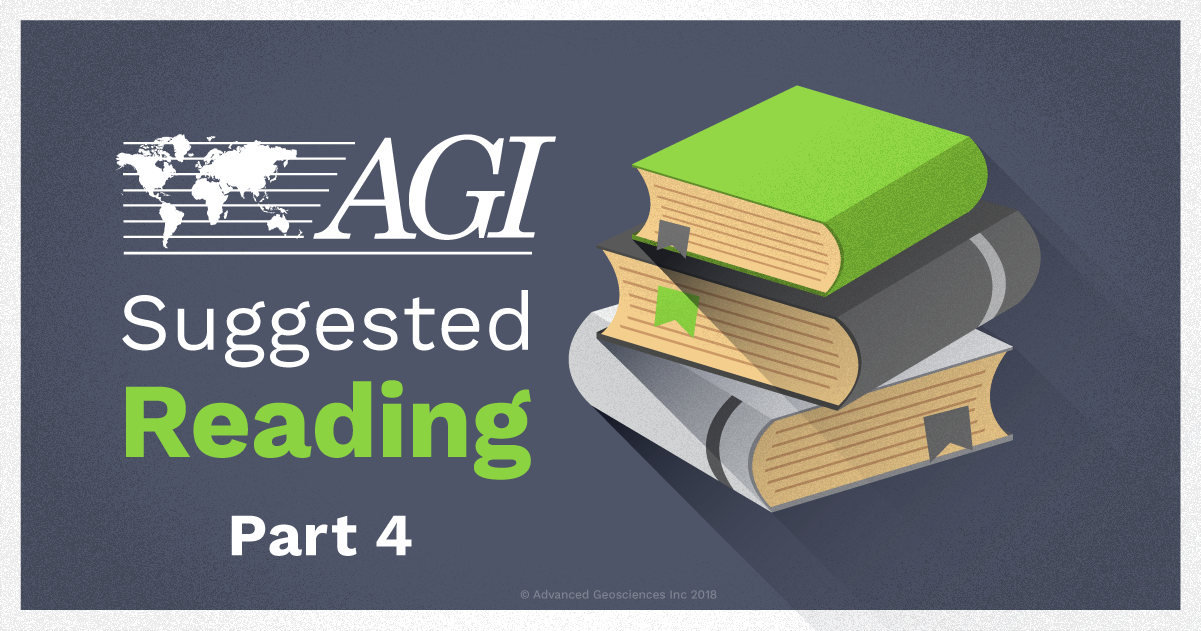 Let’s continue with our eight-part series where we’ll be recommending some further reading for those of you who want to learn more about resistivity, induced polarization, and more in the realm of geophysics. The trio of suggestions that we’ve listed below cover geophysical inversion, induced polarization, and matrix computations. Reading any (or all) of these should help to broaden your knowledge and bolster your confidence going into your next geophysical survey.

And in case you missed them, here are the previous suggestions in this series:

Lines, L.R., and Treitel, S., 1984, A review of least squares inversion and its applications to geophysical problems, Geophysical Prospecting, 32, 159-186.

Geophysical inversion involves the estimation of the parameters of a postulated earth model from a set of observations. Since the associated model responses can be nonlinear functions of the model parameters, nonlinear least‐squares techniques prove to be useful for performing the inversion. A common type of inversion applies iterative damped linear least squares through use of the Marquardt‐Levenberg method. Traditionally, this method has been implemented by solving the associated normal equations in conventional ways. However, Singular Value Decomposition (SVD) produces significant improvements in computational precision when applied to the same system of normal equations. Iterative least‐squares modeling finds application in a wide variety of geophysical problems. Two examples illustrate the approach: (1) seismic wavelet deconvolution, and (2) the location of a buried wedge from surface gravity data. More generally, nonlinear least‐squares inversion can be used to estimate earth models for any set of geophysical observations for which an appropriate mathematical description is available.

Find this publication in the Wiley online library

We develop three methods to invert induced polarization (IP) data. The foundation for our algorithms is an assumption that the ultimate effect of chargeability is to alter the effective conductivity when current is applied. This assumption, which was first put forth by Siegel and has been routinely adopted in the literature, permits the IP responses to be numerically modeled by carrying out two forward modelings using a DC resistivity algorithm. The intimate connection between DC and IP data means that inversion of IP data is a two‐step process. First, the DC potentials are inverted to recover a background conductivity. The distribution of chargeability can then be found by using any one of the three following techniques: (1) linearizing the IP data equation and solving a linear inverse problem, (2) manipulating the conductivities obtained after performing two DC resistivity inversions, and (3) solving a nonlinear inverse problem. Our procedure for performing the inversion is to divide the earth into rectangular prisms and to assume that the conductivity σ and chargeability η are constant in each cell. To emulate complicated earth structure we allow many cells, usually far more than there are data. The inverse problem, which has many solutions, is then solved as a problem in optimization theory. A model objective function is designed, and a “model” (either the distribution of σ or η)is sought that minimizes the objective function subject to adequately fitting the data. Generalized subspace methodologies are used to solve both inverse problems, and positivity constraints are included. The IP inversion procedures we design are generic and can be applied to 1-D, 2-D, or 3-D earth models and with any configuration of current and potential electrodes. We illustrate our methods by inverting synthetic DC/IP data taken over a 2-D earth structure and by inverting dipole‐dipole data taken in Quebec.

Find this publication for purchase at Amazon.com