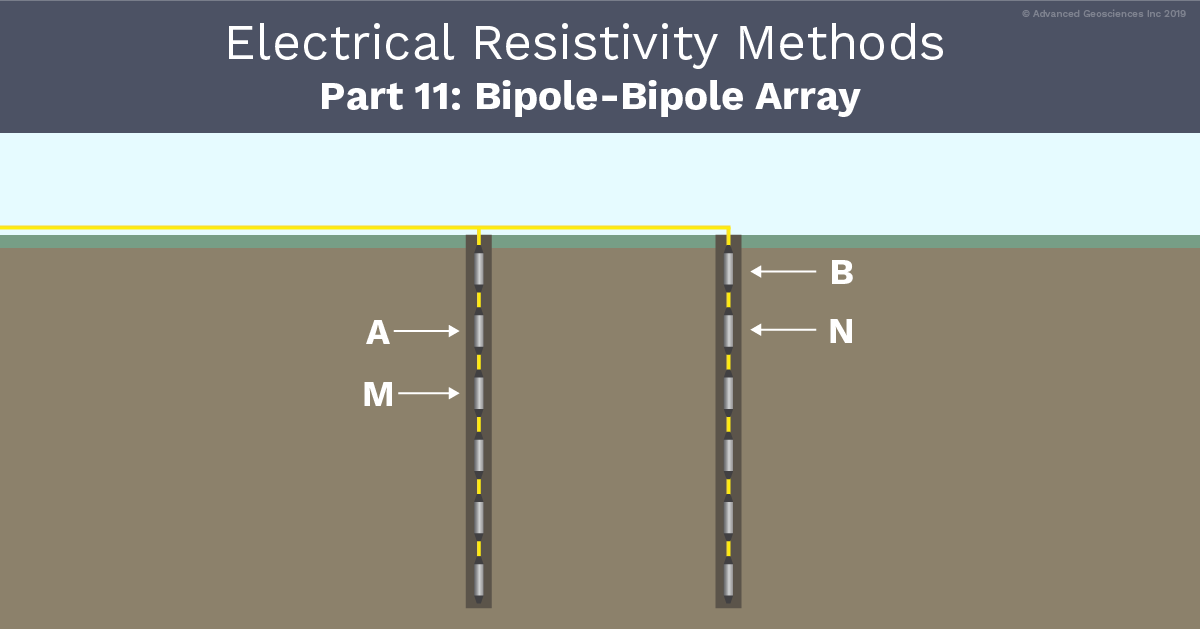 It’s been a long journey, but today we’re at the end of our 11-part series discussing Electrical Resistivity Methods. In this final discussion, we’re going to give you an overview of the Bipole-Bipole Array.

Don’t worry though, we plan to do more long-form series like this in the future about different topics!

And if this is your first time joining us, you’re in for a treat because we’ve also covered all of the following methods:

What is the Bipole-Bipole Array?

The word “Bipole” is used instead of “Dipole” when the two transmitting electrodes are placed so far apart that the electric field from them can be considered a field from two separate poles. In other words, the distance between the receiver and transmitter dipoles is small in relation to the dipoles themselves.

Benefits, Considerations, and Applications of the Bipole-Bipole Array

Benefits: The Bipole-Bipole Array becomes very useful on cross-borehole studies for strong current injection, where generally, Dipole-Dipole fails to do so. It’s also useful for some uncommon 3D geometries

Considerations: Though it's also possible to use the Bipole-Bipole Array for any mix of surface and depth electrodes (electrodes installed within the earth materials)—you cannot use this array unless some of the electrodes in your geometry have a negative Z-value. So if using this array, be prepared to install electrodes beneath the surface via boreholes or some other method.

Applications: As mentioned above, the Bipole-Bipole Array is useful for some uncommon 3D geometries. For instance, if you want to install electrodes surrounding a large building, or structure. You would want to use Bipole-Bipole instead of Dipole-Dipole because the current and voltage electrodes are going to be far apart.

If you want to see some actual Bipole-Bipole data, we have a case history that you can check out!