How can Groundwater become contaminated? 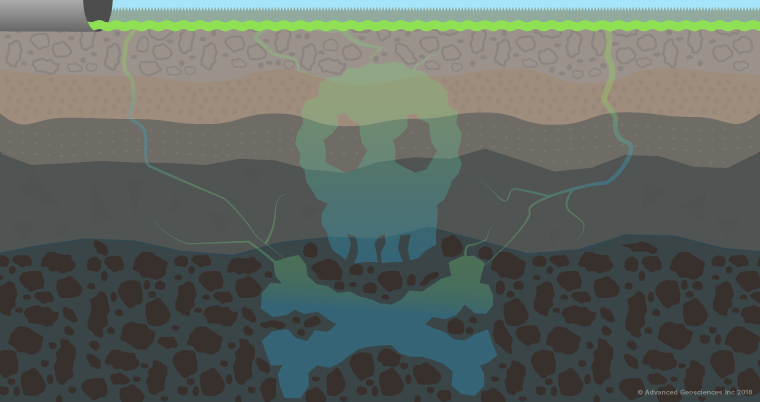 It’s time again for another entry in our ongoing groundwater series. Today, we’re talking about the more dangerous aspect of groundwater. Specifically, groundwater pollution and contamination. Unfortunately, there are far too many ways for us to cover in one post—but we can always revisit this topic in the future.

So, how does groundwater become contaminated? Well, the short answer is both natural and human-caused pollution can occur. You’ll see below that man-made causes make up the majority of groundwater pollution. But before we blame our species for everything, let’s take a look at one way mother nature contaminates groundwater:

Arsenic occurs naturally in some minerals, and at times, in high concentrations. A high concentration of arsenic has the potential to contaminate groundwater—which consuming could cause skin lesions, cancer, cardiovascular diseases, and neurodevelopmental delays (Source: Sciencemag.org). Arsenic poisoning from tainted groundwater has been a consistent problem in several countries across the globe. In fact, arsenic-poisoned drinking water has threatened up to 60 Million people in Pakistan. (Source: Sciencemag.org)

Ok, we’ll take it from here Mother Nature. Here are some of the man-made causes of groundwater pollution:

This is when saline levels in water become unfit for human consumption, plant consumption, or agricultural use. For humans, saline water isn’t inherently dangerous but it does become nonpotable for consumption around 250 mg/l (Source: learner.org). There are a few ways salinization can occur in groundwater (time for a list within a list!):

This includes improper disposal of chemicals like household cleaners, and fertilizers/pesticides/herbicides for crops. For pesticides and herbicides, most often there isn’t a proper way to dispose of them after use. The only option is to wait for the chemicals to be washed off from rain or irrigation—which eventually makes its way through soil and into groundwater.

Sewage treatment plants remove most contaminants from wastewater so that it’s safer for the environment. However (as you’ll see in point 8 below), contaminants like medications can still slip through. Septic systems, which house human waste outside of the sewage system, are typically designed with safety features in place. However, when these features fail, wastewater seeps directly into soil—and then makes its way to the water table. On farms, or other areas with a high concentration of free-roaming animals, high levels of untreated animal waste can threaten groundwater as well.

Similar to septic systems, landfills are typically designed with a safety feature in place to keep hazardous materials from seeping into the soil. If these safety features aren’t used, or if they fail, it would have a significant negative impact on any nearby groundwater.

In the U.S. alone, there are 20,000 known abandoned and uncontrolled waste sites (Source: Groundwater.org). That’s 20,000 locations that have the potential to seriously poison groundwater sources. Unfortunately, that number is growing—which doesn’t include the illegal dumping sites that we don’t know of.

7. Contaminants in the Atmosphere:

Our world runs on the hydrologic cycle. As such, if one part of the cycle is polluted—like the atmosphere—then that could potentially spread to groundwater sources as well.

As we mentioned above, excreted pharmaceuticals (from both humans and livestock) can make their way through sewage treatment plants and back into the ecosystem. Even unused medications that have been improperly disposed of—such as being flushed down the toilet—pose a threat of becoming part of the hydrologic cycle. Though studies say that the amount of pharmaceutical pollution doesn’t yet pose a major threat to human health (Source: Water Research Vol. 72), this is still a growing concern for aquatic life (Sources: Harvard Health Publishing & HealthDay News).

Two major culprits of hydrocarbon poisoning are gas stations and chlorinated solvents. Each time the pump nozzle is pulled from the vehicle, a few drops spill on the ground. Older gas stations may have corroded tanks that often leak. These hydrocarbons are referred to as LNAPL’s (Light Non-Aqueous Phase Liquid) because they tend to float on top of water. Even in low concentrations, you can smell the contaminant in polluted water. Chlorinated solvents, such as industrial degreasing agents, are hydrocarbons referred to as DNAPL’s (Dense Non-Aqueous Phase Liquid). When DNAPL’s contaminate an aquifer they are very tricky to remove because they are denser than water—but also don’t dissolve in water. (Source: EPA.gov)