How does a marine electrical resistivity survey impact fish? 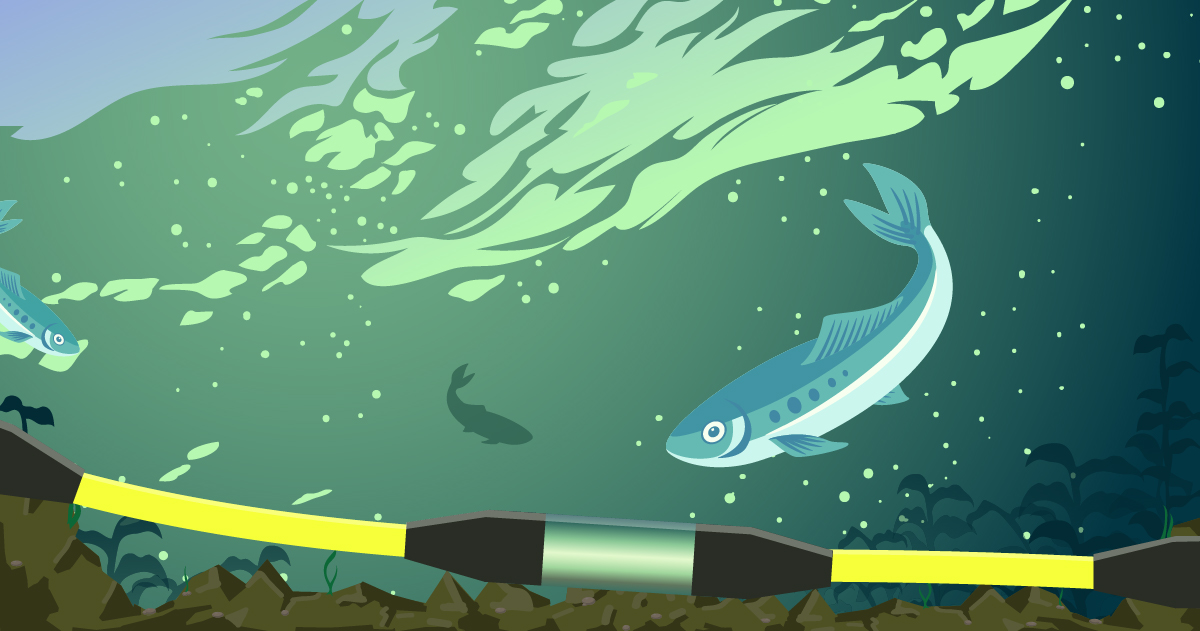 Perhaps you’ve seen our April Fool’s Day video for this year, where we joke about our cables being used for high-octane fishing. While our cables cannot take down a 400lb (181kg) swordfish, you may be asking yourself—how do the electrical currents used in marine resistivity surveys impact smaller fish?

As we’ve seen in a previous post, animals tend to have an attraction to electrical resistivity survey areas. This is also the case in marine environments. Since there is typically a higher volume of wildlife to account for in water than on land, we would say that there’s more of a chance that your marine survey is going to interact with aquatic wildlife in some way.

As such, we’ll occasionally get a question from concerned customers about the wellbeing of fish that may come across an electrode. More specifically, is the electrical current being injected into the water during the survey harmful to fish? Well, let’s look into that.

Before we dive into the question above, it’s important to understand how a marine survey works.

During aquatic resistivity surveys, a DC current is injected into the water through cylindrical electrodes made of stainless steel or graphite. Simultaneously with the current injection, the responding voltage is recorded at other electrodes along the survey line. 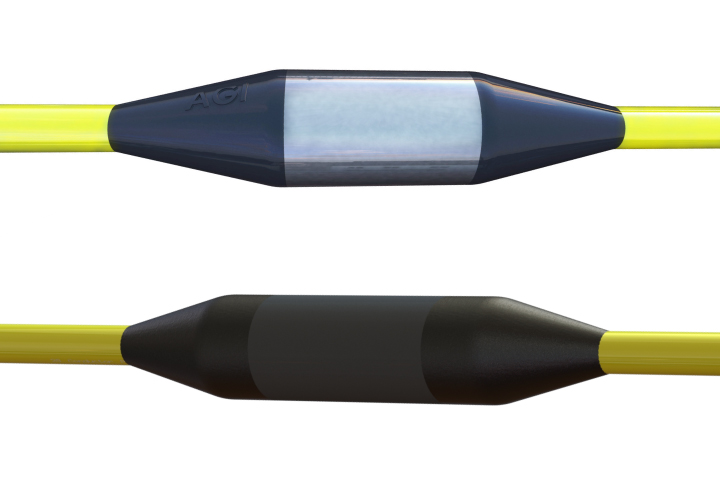 Above: Examples of Stainless Steel (top) and Graphite (bottom) electrodes.

The cylindrical electrodes, length 1.5” diameter 1”, are mounted along a cable at even intervals. The interval between electrodes could be a few meters to a few tenths of a meter.

There are two types of survey methods: static and dynamic. For a static survey, the electrode cable is placed at the bottom of the body of water or floating in a fixed location during the measurement. For a dynamic survey, an electrode streamer cable is towed behind a boat during measurement. In both cases, the current is penetrating into the water and/or the bottom sediments. You can learn more, and see actual video footage of an underwater survey in this blog post.

During the actual measurements, a DC current is injected into the water. Typically, the injected current is between 1-2 Ampere and between 100-200 Volt for approximately 1-2 seconds. Marine geophysical electrical surveys are performed in freshwater as well as in saltwater bodies.

To get more context on electricity’s effect on fish, let’s look to a similar method that is used in the field of marine biology. The method we can compare to is called electrofishing.

Electrofishing is when electricity is used in a very localized area to stun fish in order to capture them for monitoring abundance and distribution. Biologists may need to kill a small portion of fish depending on their work. Often times, when the procedure is performed correctly, electrofishing results in the fish being stunned for a minute or two—afterwards, the fish return to their natural state, unharmed. (Source: From Wikipedia “Electrofishing”)

Electrofishing can be used with alternating current (AC), direct current (DC), or pulsed DC. For our purposes, we are only considering the DC and pulsed DC methods since these are the methods most similar to our geophysical electrical survey technique.

During electrofishing using the DC method, an electric current of up to 1-2 Ampere and between 100-500 Volt is passed from the cathode to the anode, both submerged in the water. Again, this is controlled to a very small area, typically with one operator acting as the positive transmitter and another operator as the negative transmitter. A third operator would be standing by with a net to collect the samples (i.e, fish). These current values are of the same order of magnitude as the ones used during geophysical electrical surveying. 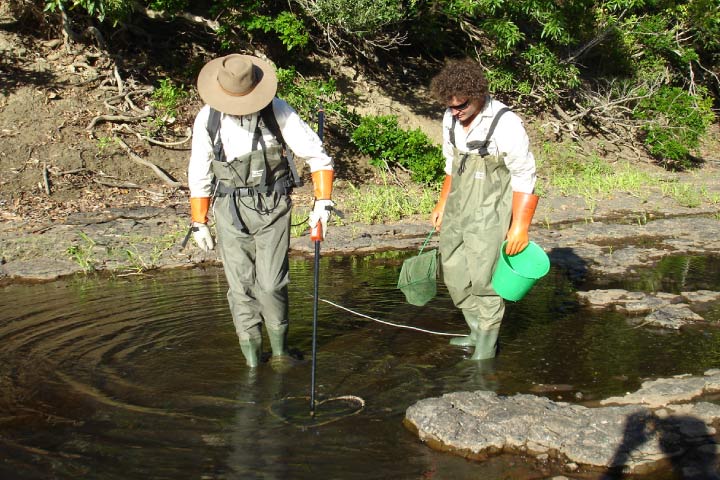 Further, according to (Beaumont et al., 2002, page 12), there exists an “attractive zone,” at a certain distance from the electrode—where fish starts to swim towards the electrode.

The voltage required to be applied at the electrodes in order to attract and stun fish will vary according to ambient water conductivity, so that higher voltage is required in water of high conductivity.

In salt water, the opposite condition is true. The conductivity of the fish is lower than the salt water and the electrical current will prefer passing through the water. This explains why electrofishing only works in fresh water.

Several cases of small fish (minnows) being killed by underwater electrical measurement has been reported by Dr. Jonathan Nyquist, Temple University. Measurements were performed in small freshwater streams and the dead minnows were found close to the underwater electrode. The fish may have been attracted to the electrode by the transmitted electrical field or the shiny stainless steel electrode. 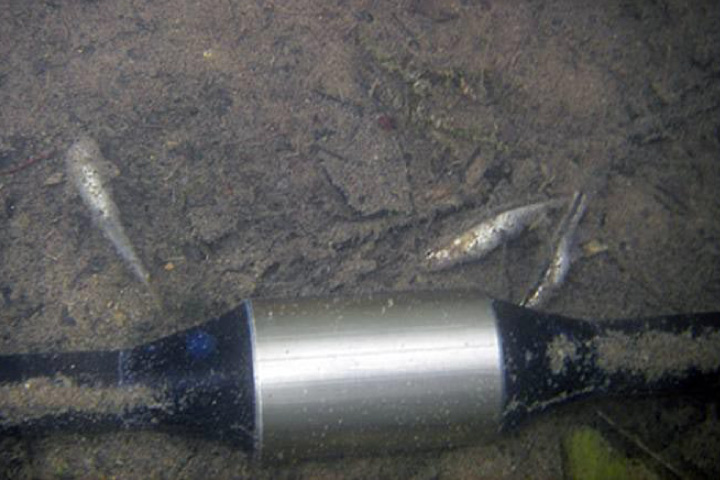 It is possible that the dull grey color of graphite electrodes (seen above) would be better to use from the standpoint of reduced visual attraction for the fish, rather than the shiny stainless steel electrodes.

To our knowledge, no other report of stunned or dead fish in connection with underwater electrical surveys have been received.

To protect fish from getting too close to the electrode, where the electrical potential gradient is large, an “improvised electrode protective cage” (IEPC) could be used. The picture below shows such an IEPC constructed from a plastic foam pool “noodle”, plastic insect screen, and two wire ties. 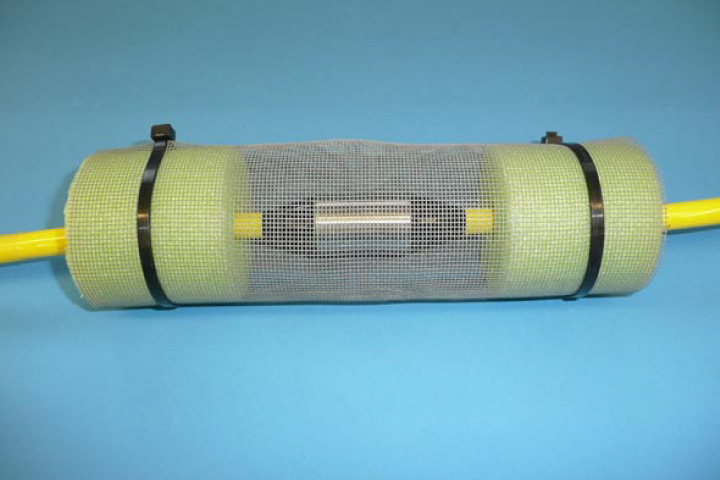 When performing a static survey, the IEPC needs to be placed on all electrodes, since all of them may become a current electrode at any given time during the survey.

When performing a dynamic survey, the IEPC only needs to be placed over the current injection electrodes. Typically, these are the first two electrodes of the electrode streamer.

One built-in level of protection is the spacing of the electrodes and the timing of the electricity passed through the electrodes. For a marine resistivity system, a cable usually has electrodes which are 1-3 meters apart—which is far less localized than what is used in electrofishing. These electrodes are energized for 1.2 seconds before moving to another pair. The chance of a fish being between energized electrodes long term during a command file is very rare.

Nothing has been found in the literature regarding impact on fish from geoelectrical surveys in water. It is clear though, through our own experiences and customer anecdotes, that fish could be harmed or killed by an underwater electrical survey if certain safety measures aren't taken. Several factors like the size of the fish, its proximity to the current electrodes, how long the current runs, and whether the survey area is in freshwater or saltwater will determine the electricity’s effect on the fish.

Therefore, extra care can be taken to prevent fish from getting close to the electrodes (especially when surveying in fresh water or in areas where endangered fish live).

Protection can be achieved by placing an improvised electrode protection cage over each electrode designated as a current electrode or using matte-colored graphite electrodes. Electrodes designated to only measure voltages will not be of any danger to fish.