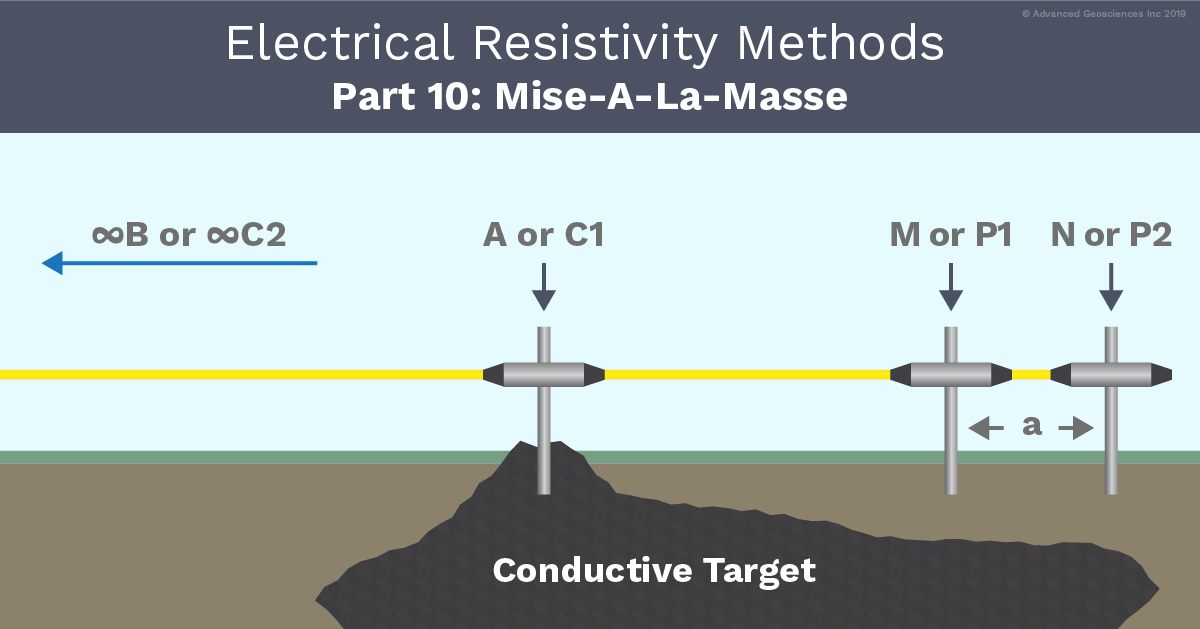 Hello again, and welcome back to our 11-part series discussing electrode arrays and electrical resistivity methods. In this post, we get to brush off our high-school French with the Mise-a-la-Masse Method.

In case this is your first time, we’ve also covered the following:

What is the  Mise-a-la-Masse method?

Like Vertical Electrical Sounding (VES) and profiling, or the Azimuthal Method—Mise-a-la-Masse is more a method than an electrode array. You may have seen this method also called the “charged body potential method” or the “excitation-at-the-mass method”. Loosely translated from French, Mise-a-la-Masse means “charged body”.

This method was very popular in the 1920’s and 1930’s for searching out ore bodies. In fact, it’s still used today for the same reason—among others. If you’re looking to use this method, the Pole-Dipole array is most frequently paired with Mise-a-la-Masse.

Benefits, Considerations and Applications of Mise-A-La-Masse

Benefits: Mise-a-la-Masse was popular in the 20’s and 30’s for a reason. It’s a relatively easy method to use, and it’s a great option for the applications we’ve listed below.

Considerations: Though it’s great for a specific use, it’s not a method that you’ll need to use often.

The Mise-a-la-Masse method can be useful if an ore body is discovered during drilling. While you may know there is an ore body in the vicinity, you likely don’t know its direction or how it extends underground. Using Mise-a-la-Masse can help you to be more precise in your exploration and excavation. For ore exploration, you would essentially follow the steps we outlined above—though your current electrode (A) would be attached to a wire and lowered into a borehole to attach to an exposed portion of the ore body.

Mise-a-la-Masse can also be used to detect leakage in rubber pond membranes or liners. For this application, it’s the same steps as stated above, except you’ll place your current electrode (A) near the edge of the pond in the water.

If there are no holes or leaks in the membrane, the instrument will not be able to send out the requested current when the current is injected into the water. But if a hole or leak is present—even if it’s the size of a pinhole—the current from the electrode will find the hole and move toward the infinity electrode (B). This creates a source of electricity in the pond which can easily be located. (More on that in a later post)