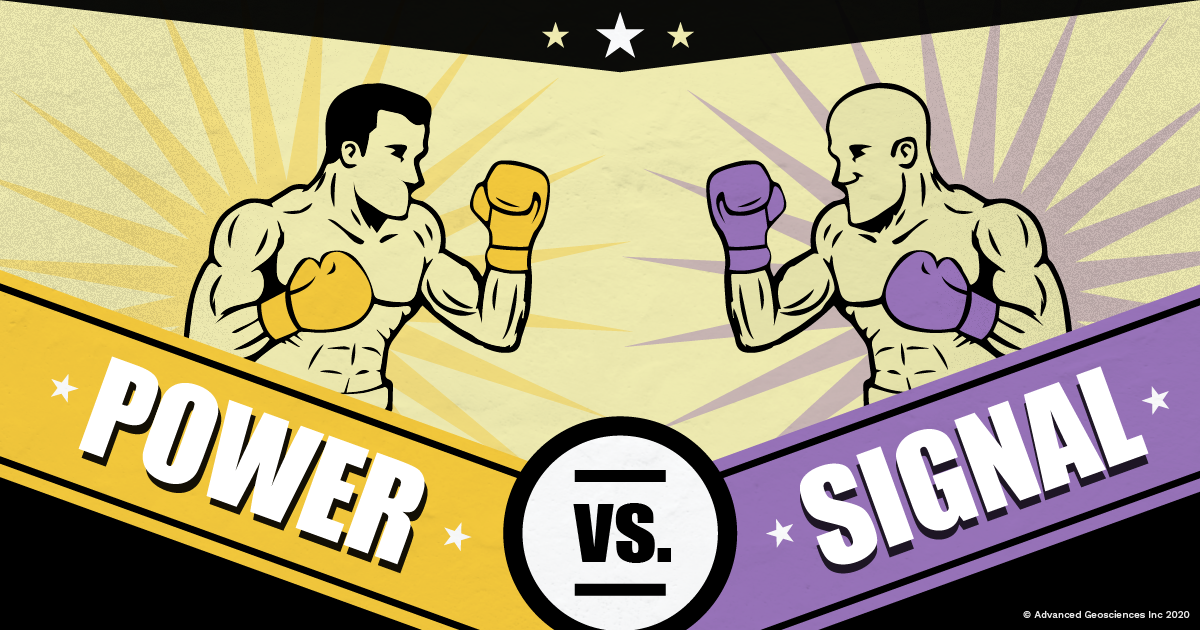 It’s understandable that most of our customers don’t initially believe us when we tell them this. In most industries—especially electronics—more power equals better, right? But ultimately they understand when they see the proof. Today, let us explain why we say that power isn’t the most important spec that you should be looking for when shopping for an Electrical Resistivity meter. Ok, let's get into it.

So what spec is more important than power?

First, it’s critical to understand a couple of things about power (current output) and its affect on resistivity measurements. The current is ultimately dependent on the contact resistance. Contact resistance becomes the most important aspect when setting up your survey.

This is because your transmitter can only output the amount of power depending on the contact resistance between the stake and ground. Therefore, the instrument will rarely ever operate at peak output. If this is the case, then power isn’t the most important spec—and in turn, your transmitter isn’t where your attention should go to. The most important spec you should look at is your signal, receiver, and the signal-to-noise ratio. And the reason for this is because of the Dipole-Dipole array, the most high-resolution array available to us.

Understanding Dipole-Dipole and why it’s important

Contact resistance is just one problem to deal with when you’re trying to get the best data. Another major problem to solve is what array to use. We’ve said it before and we’ll say it again, the Dipole-Dipole array is the best array you can use for Electrical Resistivity surveys. It is more difficult to collect but the results are far better than any other array. We often recommend it with the Strong-Gradient array.

The Dipole-Dipole array gives a weak signal, but it gives the best horizontal/vertical resolution—especially when paired with a resistivity meter with a good signal-to-noise ratio (like the SuperSting™). High-resolution data is what we’re after when using Electrical Resistivity since the whole point is to “see” what’s beneath the surface.

Pictured Above: The Dipole-Dipole Array

How does power relate to Contact Resistance and Dipole-Dipole? 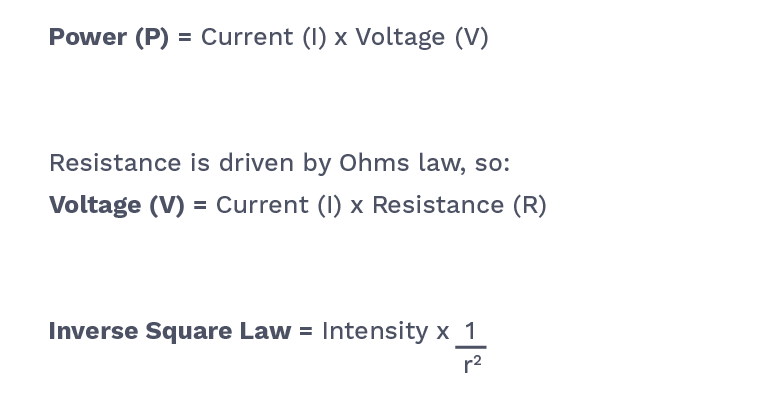 When you use Dipole-Dipole, there is a transmitter dipole and a receiver dipole which are separated by N spacing. As you can see from the formulas above, a transmitter’s increase of power is linearly proportional to the voltage increase at the receiver dipole. Additionally, because of Inverse Square Law, we also know that the energy dissipates exponentially when traveling to the furthest dipole. In fact, if the receiver dipole is too far away, the signal is lost to background noise.

The most common thought is that the solution to these problems—contact resistance and energy dissipation—is to just increase the power output. However, doing that will cause even more issues.

Remember what you’re after by doing Electrical Resistivity—noise-free and dependable data. Yes, more power allows you to overcome contact resistance, but you’re not looking to brute force your way into obtaining just any data. You’re after high-resolution data—which you can obtain by using Dipole-Dipole. Unfortunately, higher power does not work well with electronic equipment. When you increase power, you increase noise (instrument noise, induction and leakage) which is not what you want with the array’s signal-to-noise ratio. Power’s incompatibility with the Dipole-Dipole array is just one of several issues though.

You also have to generate a high amount of power from somewhere. This can often mean bigger, heavier transmitters and generators. A typical consequence of “bigger” is more expensive. Not to mention that an increase in voltage output could result in unnecessary danger, leakage, and arcing across conductors.

Why is signal and signal-to-noise ratio important?

Ok, so if more power from your transmitter isn’t the solution—then what is? Our conclusion is that your signal and your furthest receiver is what you actually need to pay attention to. We know that may sound confusing. You may be thinking, signal is just the voltage we measure at the receiver, isn’t it at the whim of the transmitter? And because of inverse square law, won’t the furthest dipole have the least amount of energy for imaging? Traditionally, this is true—unless you have a Electrical Resistivity system that increases the signal at the furthest dipole. Let us explain with an analogy:

It’s like being at a gathering where you’re trying to have a conversation with someone across the room from you. In this scenario, you would be acting as the transmitter (Tx), and the other person would be the receiver (Rx). If it were just you two in the room, it would be easy for the person to hear your voice (i.e, your transmitter signal) even at a whisper. 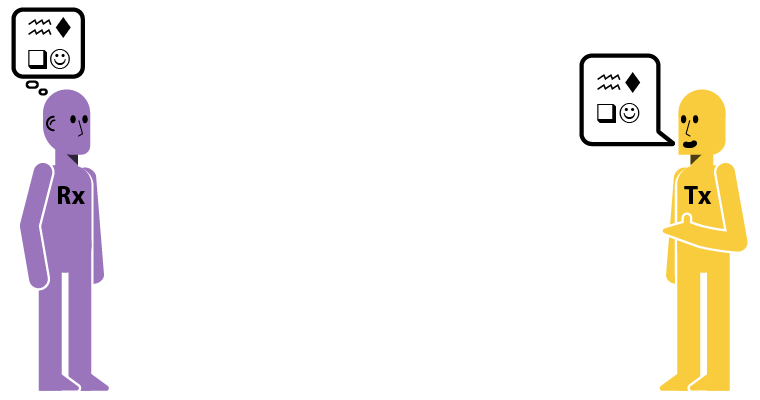 The perfect scenario: Low or no noise allows the transmitter to send a good signal to the receiver

But at a gathering, much like in nature, there is often noise to compete with. So instead, let’s say you’re in a full room of people but you’re still on the opposite side of the room of your receiver. Now, you have to deal with competing noise and your receiver may have a hard time hearing you. 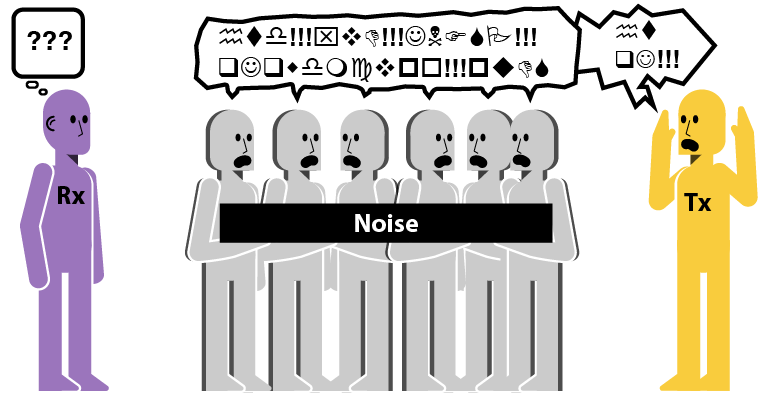 But there’s another solution to this problem. Instead, imagine that your receiver has really good hearing. In fact, their hearing is so good that they can pick out your voice in a room full of voices (this is like boosting the signal at your receiver dipole). You could speak at a normal volume or at a whisper (lower power) and the receiver would still be able to know what you’re saying. 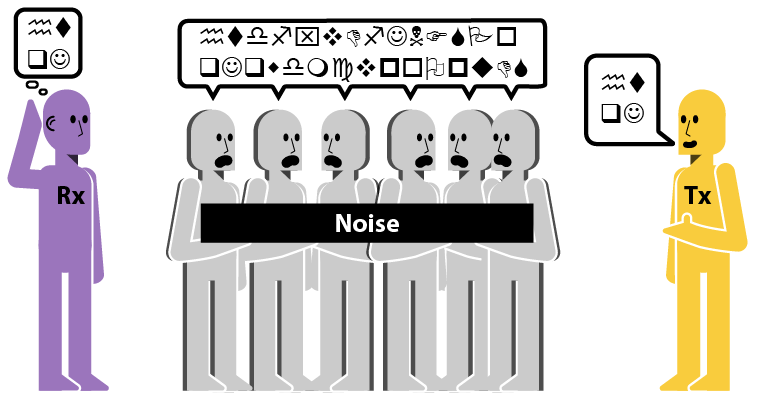 A good, sensitive receiver can receive the transmitter's signal despite background noise

That’s the solution that we think works best and the solution that systems like AGI’s SuperSting employs. It’s definitely the more difficult solution, but it’s far from impossible. And as a bonus, it helps mitigate excessive noise. We see that this solution works well in conductive marine environments, other highly-resistive environments, and in deep surveys of 500m or more where you typically need to receive signals at 1mV or less. We have been perfecting this signal-to-noise dilemma for over 30 years.

When is more power necessary?

Don’t get us wrong, power is a necessary element to your survey. What we’re saying is that a lot of power isn’t necessary for most of the work you’ll be doing on a daily basis. The way we think of it, “You don’t need a Lear Jet to go to the grocery store”. In other words, most survey requirements don’t need high amounts of power.

But there are some situations where you will need a lot of power. For instance, when you’re doing IP for extremely deep depths (over 1km depth). Also, extreme climates with very high contact resistance require more power output.

Hopefully, we’ve made it clear why we prefer a sensitive receiver over a high-power transmitter. Would you like to talk to us about this topic more, or would you like to see case studies that prove our point? Reach out to us to speak to an AGI representative about your next Electrical Resistivity job and what kind of system would work best for your needs.