Why having more than 8 channels does not mean better surveys 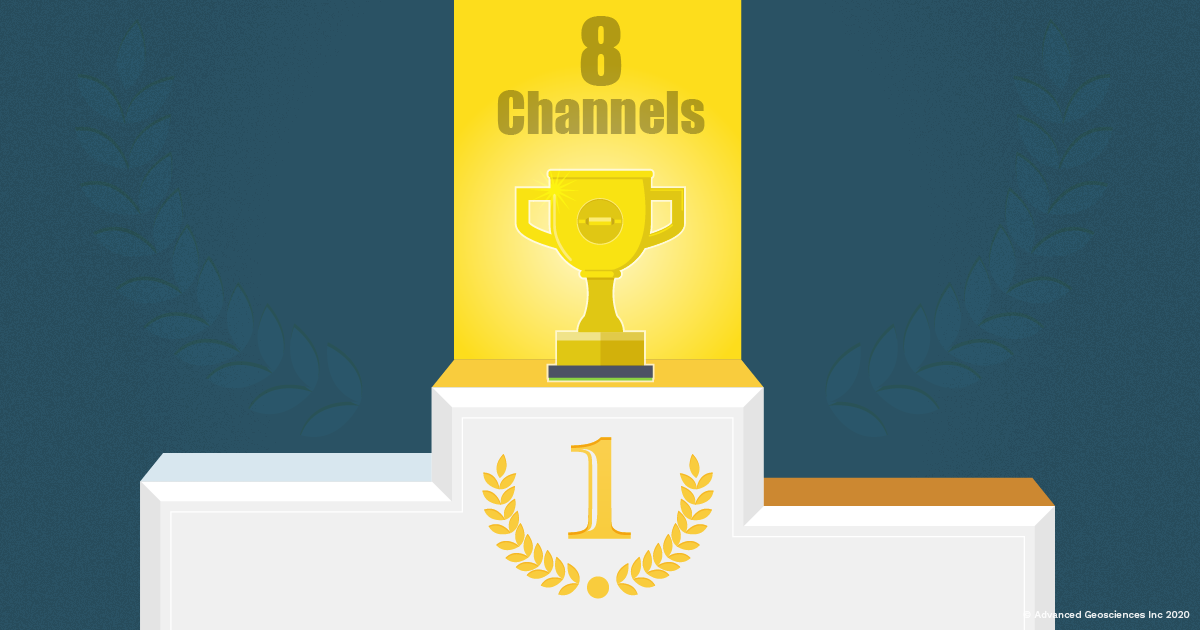 Well, yes—we did say that 8 channels are faster than 1 channel and we stand by everything in that article (Go and check it out if you haven’t already). However, you’ll notice that we never mentioned anything more than 8 channels as far as multi-channel systems are concerned. There’s a good (and familiar) reason for that. That reason once again is the Dipole-Dipole array.

Our old friend, the Dipole-Dipole array

Yes, much like our conversation about power, the Dipole-Dipole array is one of the fundamental reasons why AGI has built our systems the way that we do.

Why less is more

We can’t tell you how many times we’ve seen good surveys ruined by noisy data. It’s the bane of ERI surveys. What’s worse is that noise can come from various sources—including multiple channels. Just like with power, once you overindulge with channels, problems start to arise. It’s widely known that channels 9, 10, 11, and 12+ are too noisy to even attempt to begin a  resistivity measurement. In fact, we’ve seen many customers remove channels 9-12 from 2D lines and linear-measured 3D surveys (3D lines composed of multiple 2D lines).

So it’s noisy—but isn’t having 9-12 channels faster? Well, not really. The extra channels beyond 8 are almost never used and do not make the system significantly faster for 2D and linear-measured 3D. So while there’s a noticeable gap in speed between 1 channel and 8 channels—there isn’t a substantial boost in speed when using 9-12 channels. Take a look at the graph below. You can see that the sweet spot is around 4, 6, and 8 channels—with 8 channels being the fastest. 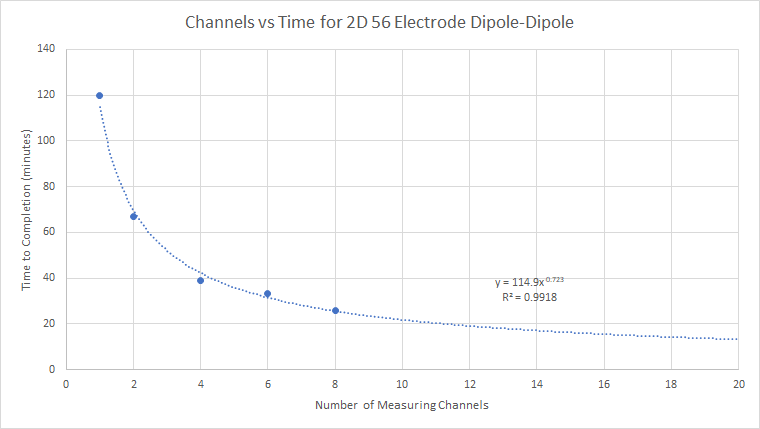 As you can see, the speed using 9 channels is practically identical to 8 channels—and 12 channels only manages to shave off a couple of minutes. In our expert opinion, 8 channels is a good standard for comparison of cost, speed and data quality to other channel designs. Would you rather spend two hours doing the same survey with 1 channel when you can do it in around twenty minutes with 8 channels? Increasing from 4 to 8-channels cuts the survey time in half from forty to twenty minutes. However, moving beyond 8-channels, you need to increase cost and complexity to 20 channels in order to cut survey time in half again which then presents some data quality issues we've touched on earlier.

Remember, we want clean, high-resolution data at our desired depth beneath the surface (but also we want to survey as fast as possible). To do this, a combination of Dipole-Dipole and an 8-channel resistivity meter is the optimal pairing.

We know that the best way to achieve depth is to increase the a-spacing and keep to an n-spacing of 8 or less. This way you can have very long lines with higher electrical potential achieved by the large a-spacing and a good signal from keeping n≦8. This is related to how potential fields in resistivity/IP are influenced by the Inverse Square Law where energy dissipates exponentially with distance from the transmitting dipole.

When is a good time to use more than 8 channels?

From our many decades of experience here at AGI, there’s a very rare instance when you’ll need more than 8 channels. Only when using a full 3D grid over a small area with a shallow depth does 9-12 channels help. An example would be an archeological site or a known void at a shallow depth. These are very specific cases as most people tend to perform linear-measured 3D if they want 3D data. This is because linear-measured 3D is more versatile, less complicated, and achieves an even greater depth. In all other instances, the extra channels only add complexity, reduce reliability, and add noise.

Hopefully, we’ve made it clear why you don’t need a system with more than 8 channels. Would you like to talk to us about this topic more, or would you like to see case studies that prove our point? Reach out to us to speak to an AGI representative about your next Electrical Resistivity job and what kind of system would work best for your needs.