Marine Resistivity Survey on the Lagoon of Venice, Italy 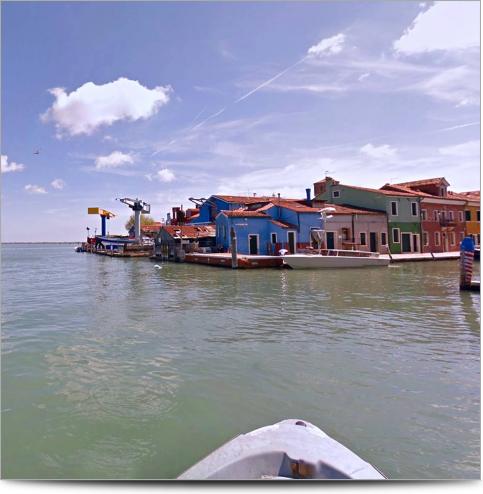 During a week in May, 2003—the DelTech International Workshop was held in Venice, Italy. The workshop hosted several seminars, equipment demonstrations, and a trip into the field—which in the case of Venice—was predominantly marine-based. As part of the equipment demonstrations, Advanced Geosciences, Inc. (AGI) participated with it’s SuperSting™ Marine towed resistivity imaging system. A preparation survey was performed beforehand and a final survey, which is the subject of this case history, was performed afterward. This report only treats resistivity data collected along lines 1 – 3.

The survey was undertaken using the AGI SuperSting™ R8 Marine system and a streamer with 11 electrodes at 3 meter intervals. The SuperSting™ instrument had 8 receivers and a transmitter, making it possible to record eight readings simultaneously as the current was injected through the two current electrodes.

The streamer was towed at the surface of the water in such a way that the electrodes were totally submerged below the surface at all times. The two electrodes nearest to the boat were used for current injection and the other nine electrodes were used for potential measurements. An electric current was injected into the water approximately every 3 seconds through the two current electrodes. The resulting eight potential differences, between the following 9 electrodes, were simultaneously measured and recorded. The survey array could be considered a moving Dipole-Dipole electrode array. Typically with this array, the method will see 25% of the electrode spread length, into the water and bottom. Using 11 electrodes at 3 meter spacing gives a maximum electrode spread length of 30 meters. The expected depth of investigation, with this electrode arrangement, was therefore 7.5 meter from the surface and down. 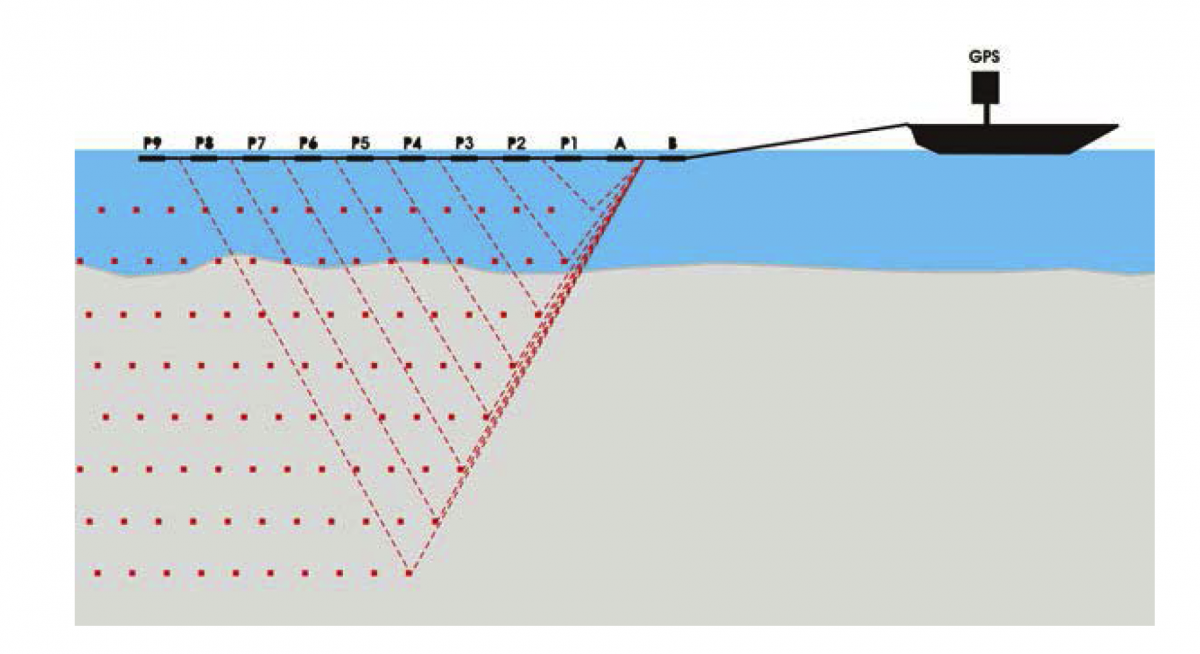 The boat was moving forward at about 3 knots (3.4 mph or 5.4 kph) with a measurement performed approximately every 3 seconds for a duration of 800 ms. This resulted in a new reading every 2 meters of travel to over sample the subsurface allowing for some data removal due to periodic noise or waves.  This speed along with the electrode spacing of 3m meters resulted in a nominal 2.5 meter resolution of the sub bottom sediment. 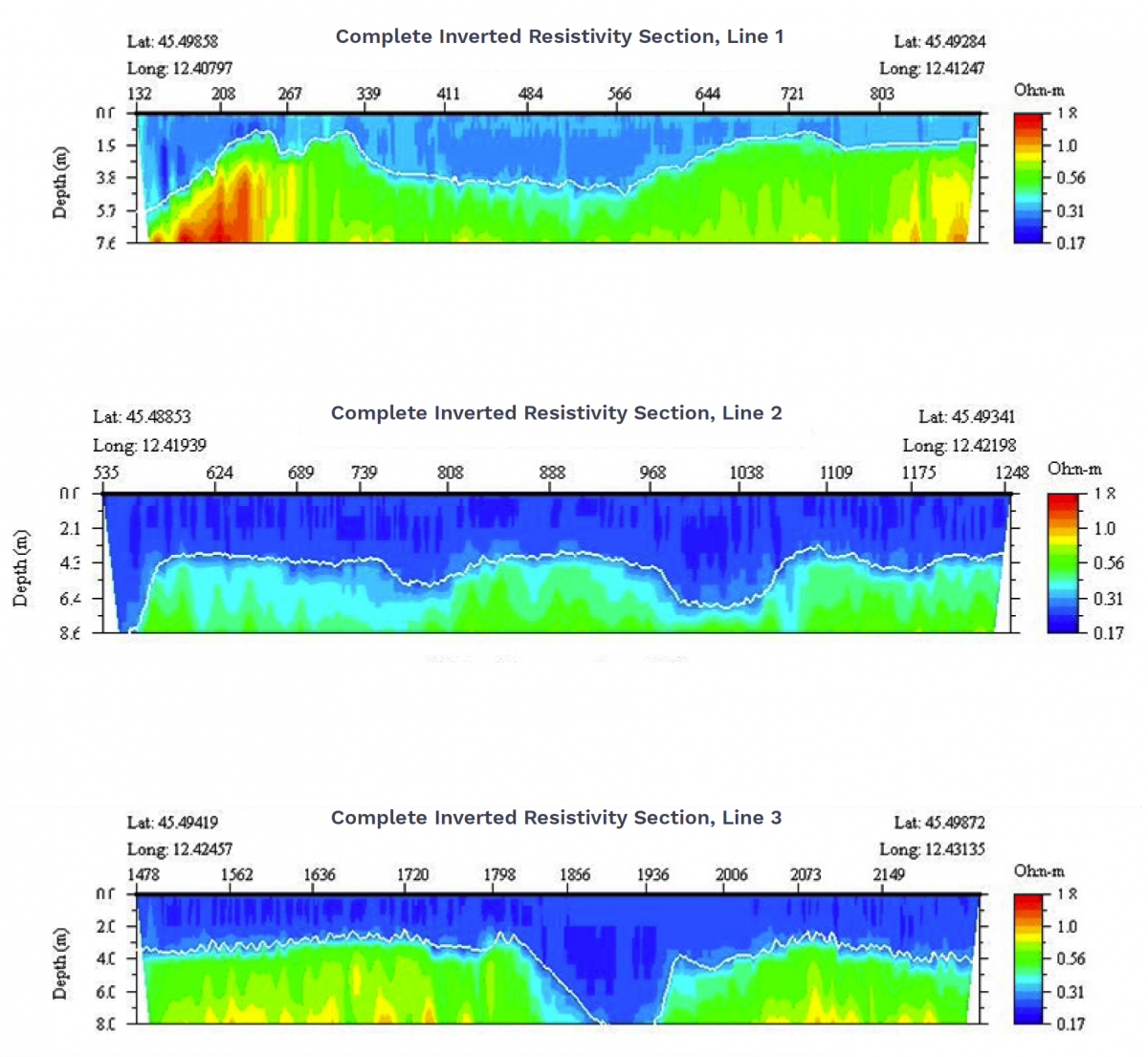 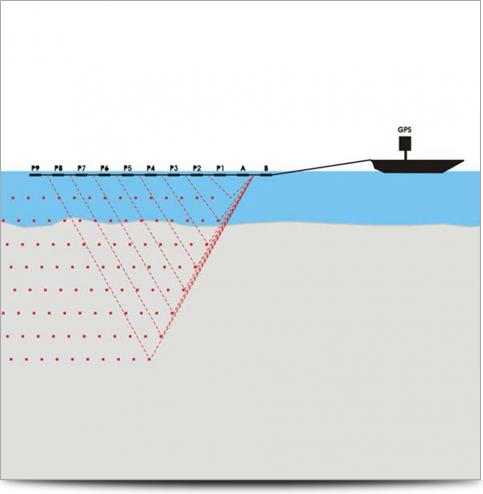 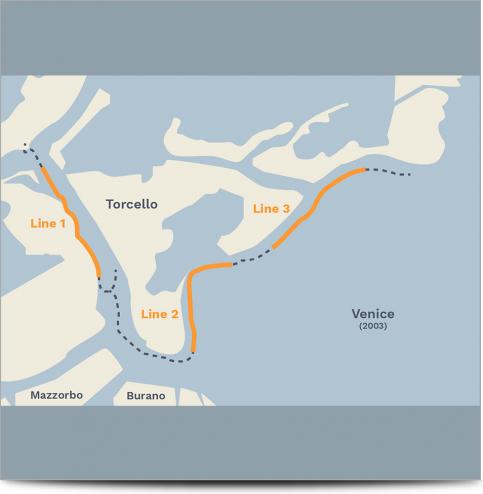 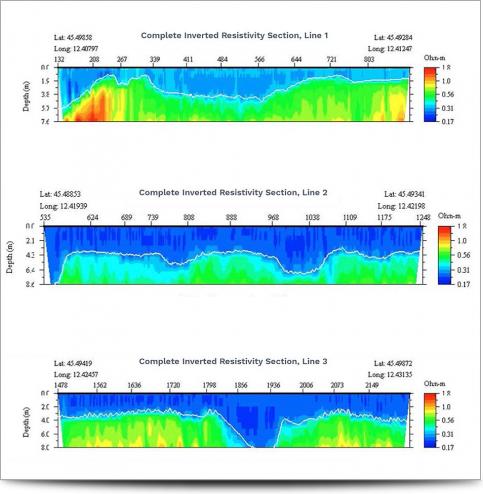